The 15 Most Famous Transcendental Numbers

The mathematical constant pi represents the ratio of the circumference of a circle to its diameter. It is the most famous ratio in mathematics both on Earth and probably for any advanced civilization in the universe. The number pi, like other fundamental constants of mathematics such as e = 2.718..., is a transcendental number. The digits of pi and e never end, nor has anyone detected an orderly pattern in their arrangement. Humans know the value of pi to over a trillion digits.

Transcendental numbers cannot be expressed as the root of any algebraic equation with rational coefficients. This means that pi could not exactly satisfy equations of the type: pi2 = 10, or 9pi4 - 240pi2 + 1492 = 0. These are equations involving simple integers with powers of pi. The numbers pi and e can be expressed as an endless continued fraction or as the limit of an infinite series. The remarkable fraction 355/113 expresses pi accurately to six decimal places.

In 1882, German mathematician F. Lindemann proved that pi is transcendental, finally putting an end to 2,500 years of speculation. In effect, he proved that pi transcends the power of algebra to display it in its totality. It can't be expressed in any finite series of arithmetical or algebraic operations. Using a fixed-size font, it can't be written on a piece of paper as big as the universe.

I also talk about all the mysteries of pi in my book Keys to Infinity.

Long ago, Keith Briggs from the Mathematics Department of the University of Melbourne in Australia computed what he believed to be the world-record for the number of digits for the Feigenbaum number:

Briggs carried out the computation using special-purpose software designed by David Bailey of NASA Ames running on an IBM RISC System/6000. The computation required a few hours of computation time.

Imagine a race of talking ants. The ants can compress the infinite digits of pi in an interesting way. For example, let us imagine that the ants can speak by manipulating their crude jaws. The first ant in the long parade of ants screams out the first digit, "3". The next yells the number on its back, a "1". The next yells a "4", and so on. Further imagine that each ant speaks its digit in only half the time of the preceding ant. Each ant has a turn to speak. Only the most recent digit is spoken at any instant. If the first digit of pi requires 30 seconds to speak (due to the ant's cumbersome jaws and little brain), might the entire ant colony will speak all the digits of pi in a minute? (Again, this is because the infinite sum 1/2 minute + 1/4 minute + 1/8 minute + ... is equal to 1 minute.) Astoundingly, at the end of the minute, there will be a quick-talking ant that will actually say the "last" digit of pi! The geometer God, upon hearing this last digit, may cry, "That's impossible, because pi has no last digit!"
(See below for an email from Brian B. on the talking ants.)

Here are some nice web pages on transcendental numbers: 1, 2, and 3.

Here is a book on transcendental numbers.

Dottie noticed that whenever she typed a number into her calculator and pressed the cosine button repeatedly, the result always converged to this value. Wow. The number is well-known, having appeared in numerous elementary works on algebra already by the late 1880s. The Dottie number is transcendental as a consequence of the the Lindemann-Weierstrass theorem. This text about Dottie is adpoted from MathWorld.

Comments from Colleagues on
Their Passion for Transcendental Numbers

Although they are not often recognized as such even by mathematicians, there are a lot of commonly-used numbers that are also transcendental, which can easily be shown by the Gelfond-Schneider theorem mentioned in the tenth item on the list. If a is algebraic, and c is algebraic, and b = logarithm (base a) of c is not rational, then b must be transcendental or else the theorem would imply that c must be transcendental--a contradiction. Then, with a=10 and c=2, the log of two, base ten, is transcendental, and so is any base ten logarithm of any rational number other than rational powers of ten. The same holds for any other rational logarithm base--so there are a lot of transcendental numbers that are in common use. Or they were forty years ago, before handheld calculators!

I'd also like to point out that any number can be used to produce a transcendental by using Liouville's algorithm (see item number five). If the number is terminating, convert it to non-terminating by subtracting one from the last digit, and adding an infinite string of 9's to the end. Then just put each of its digits where Liouville puts a one, even if the digit is zero. The result will be a transcendental number.

Brian B. comments on the talking ants above:

On your transcendental number page (https://sprott.physics.wisc.edu/Pickover/trans.html), you say: "Astoundingly, at the end of the minute, there will be a quick-talking ant that will actually say the 'last' digit of pi!" This is not correct. There is no last ant in an infinite line of ants, just as there's no last digit of pi. This can be seen easily by having all the ants announce their digit at exactly the same time. It takes zero seconds to say all the digits, but there is still no last digit, or last ant. Or forget about the ants entirely and just have each digit announce itself at the same moment. Still no last digit, though, just like there's no end to the natural numbers. I hope you'll fix this on your page. I think it would probably be best just to remove the entire "ant" section. Thanks. 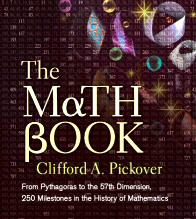 This page has been translated into perfect Russian, here.