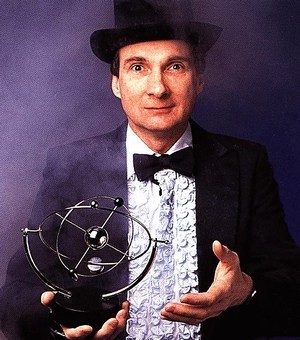 A Sourcebook for
Teachers of Physics

Copyright © 1996
Julien Clinton Sprott
All rights reserved In the matter of physics, the first lessons should contain nothing but what is experimental and interesting to see. A pretty experiment is in itself often more valuable than twenty formulae extracted from our minds.*  -- Albert Einstein *A. Moszkowski, Conversations with Einstein, page 67, Horizon Press (1970).

A NOTE TO THE READER

This preliminary, partial manuscript is a very early, incomplete version of a published book. The much more extensive, heavily illustrated, and up-to-date, full-color, 300-page version was published by the University of Wisconsin Press in 2006 and can be ordered here. You may copy this material for your personal use. Further distribution or commercial use requires permission of the author.

The demonstrations and other descriptions of procedures and use of equipment in this book have been compiled from sources believed to be reliable and to represent the best opinion on the subject as of 1990. However, no warranty, guarantee or representation is made by the author as to the correctness or sufficiency of any information herein. The author does not assume any responsibility or liability for the use of the information herein, nor can it be assumed that all necessary warnings and precautionary measures are contained in this publication. Other or additional information or measures may be required or desirable because of particular or exceptional conditions or circumstances, or because of new or changed legislation. Teachers and demonstrators must develop and follow procedures for the safe performance of the demonstrations in accordance with local regulations and requirements.

See the essay Injuries in School/College Laboratories in USA by Dr. R. Standler at
http://www.rbs2.com/labinj.htm which discusses the law in the USA about injuries to pupils or students in school or college science laboratories.

The teaching of physics is clearly enhanced by the use of demonstrations. Visual examples of abstract concepts aid immeasurably in their mastery. They also provide an opportunity to illustrate the scientific method and to teach the student to relate experimental observation to scientific theory. Experiments represent the means by which scientific knowledge has advanced so rapidly in modern times. Finally, not to be underestimated, the use of demonstrations makes the learning of physics much more enjoyable!

To write a book that purports to describe all possible physics demonstrations would be a formidable task since the discipline of physics is so all-encompassing. Instead, I have selected demonstrations that are especially dramatic or provocative, as well as some of the standard demonstrations that can be presented in unusual ways. In part, this reflects my feeling that it is necessary to get the attention of the students and convince them that physics is interesting before any real learning can occur, but also because there seems to be little help available for the instructor who wants to improve the quality of his or her presentation. This book is thus not meant to contain a complete set of demonstrations for the teaching of elementary physics, but rather to provide the instructor with ideas for new demonstrations and better ways to present old ones.

There are many other books on physics demonstrations listed in the bibliography. A number of these are far more complete than the book I have written. Some are quite old and do not make use of the advances in instrumentation of the past few decades. I have attempted to complement these works by concentrating less on the description of the apparatus, much of which is now well-known and commercially available, but more on techniques for bringing them to life and generating interest in them. For example, I have included historical anecdotes and other commentary to add to the interest and have suggested alternate uses for the apparatus. I have provided brief explanations of those facets of the demonstrations that may not be obvious to a trained physicist or physics teacher. I have also emphasized safety more than is usual in such books.

The usual style of books on physics demonstrations is to list the important concepts and to give a large number of demonstrations to illustrate each one. The majority of these demonstrations, though pedagogically sound, are not very suitable because they require close, careful measurement, or they are not easily visible to a large audience, or they are simply not very exciting. They belong in a laboratory, not as part of a lecture. I have taken a different approach, in that I describe the demonstrations first and then mention the many physics concepts that are illustrated. This departure from the usual teaching mode in which the concepts are introduced sequentially has proved especially effective for informal presentations to the public and to children who have not studied physics.

When I cause a soap bubble filled with methane gas to explode by touching a lighted candle to it (section 2.4), no one in the audience is asleep, and I can proceed to discuss thin films, surface tension, Archimedes' principle or any number of other related topics with their full attention. There are certainly more "scientific" ways to demonstrate the variation of the speed of sound with the density of a gas than by breathing helium and sulfur hexafluoride (section 3.1), but few students will forget the result, and it is hard to resist wanting to know the explanation. The talking head (section 6.5) and Pepper's ghost (section 6.6) are extraordinarily elaborate demonstrations of the rather simple ideas of the total and partial reflection of light off the interface between two media, but when one contrasts this method with the way such concepts are usually taught, it is no wonder why physics has the reputation of being dry and uninteresting.

It is my hope that this book and the accompanying video cassette tapes of "The Wonders of Physics" will also inspire teachers of physics to take the demonstrations beyond the classroom to the general public. All that is required is a notice to the media and a carefully planned, fast paced presentation of 20 to 30 demonstrations. Such a program never fails to attract an enthusiastic audience. The public is hungry for entertainment with educational value, and demonstrations such as described in this book will appeal to adults and children alike.

My own program is a yearly event with the best of the old demonstrations and about half new ones each year. The program is repeated several times in the space of a week or two to accommodate the demand. This is preferable to using a larger hall in which it might be difficult to see many of the demonstrations. The schedule avoids saturating the interest and permits adequate time to develop dramatic new demonstrations. The demonstrations for the general public generate a continual demand for special presentations to schools and other groups.

This book is intended for use by those with a good knowledge of physics, and thus the scientific principles involved are not explained in great detail. Many elementary physics texts are available to fill this need.

The apparatus required for the demonstrations varies considerably in complexity. Some of the demonstrations can be done with equipment available at home or from a local hardware store. Others are best constructed from components found in a well-equipped physics laboratory or available from specialized mail-order vendors. In such cases, I have tried to provide references to articles that describe the construction or have outlined the important considerations that must go into the design, but I have largely avoided a cookbook approach to the assembly of the required apparatus since there is usually great leeway in the design depending upon the resources available. Some of the more complicated demonstrations are available ready-made from vendors of scientific apparatus, and in such cases I have included possible sources in a footnote.

Although most of the demonstrations are completely safe, a few involve potential dangers and should be carried out only by someone knowledgeable in physics as well as experimental technique. The dangers include burns from heat, caustic chemicals and high frequency electricity; frostbite from handling cryogenic materials; cuts especially from broken glassware; explosions from high pressure gases and volatile substances; implosions from evacuated glassware; asphyxiation; electrocution; eye damage from lasers; and exposure to radioactivity. The major hazards are mentioned, but a large dose of caution and a respect for the forces of nature are essential.

I am indebted to many people in the preparation of this work. The book is patterned after Chemical Demonstrations by Professor Bassam Shakhashiri whose example and encouragement also inspired "The Wonders of Physics" lectures. Many of the demonstrations have been handed down within the University of Wisconsin Physics Department for so many years that their origin is unknown. Others have come from the suggestions of friends and colleagues too numerous to mention. To all who have contributed, I offer my sincere thanks.

Video cassette tapes and DVDs of "The Wonders of Physics" containing most of the demonstrations described in this book are available from:

The Wonders of Physics Lecture Kit This kit of materials describes "The Wonders of Physics" program in detail. It includes a videotape of "The Wonders of Physics," the PHYSICS DEMONSTRATIONS software, a book explaining the motivational and logistical considerations, and samples of handouts and publicity materials. It is intended as an aid for physics teachers and physicists who want to start similar programs or enhance already existing ones. It can be obtained for $90 postpaid from: