The year was 1955. Dwight Eisenhower was president, and it was a much simpler time, especially in Memphis, Tennessee where 12-year-old Clint Sprott, ex-KN4BOM, had just received his Novice Amateur Radio license in the mail. Two years earlier, 11-year-old Quent Cassen, ex-WN4YMG, had also become a Novice. Within the year we had upgraded to Generals and became lifelong friends, sometimes called the “CQ twins” by local hams during our teenage years.


Our early Amateur Radio days were spent on 40 meters with low-power homebrew CW transmitters. Hams built a lot of their own equipment in those days, especially teenagers on weekly allowances. Clint mowed lawns, and Quent had a paper route to make enough money to buy the parts to assemble their early equipment. Quent had a Hallicrafters S-40B receiver, purchased from Sears, and Clint used a National NC-98 receiver that Santa Claus had left under the tree. Clint remembers the trepidation with which he made his first QSO on 17 January 1955 with K4ASL, nearly a mile away, on the 40-meter CW Novice band. Quent remembers yelling to his mom “What should I tell him?” when it was his turn to transmit.

Amateur Radio in the 1950s was quite different from today. There was the thrill of listening to the first satellite to orbit the Earth, Sputnik 1, launched by Russia in October 1957. Sputnik was easy to tune in (click here to hear what it sounded like) since it transmitted at 20.007 MHz, just above WWV. Receivers weren’t so good in those days, and it helped to have WWV as a marker to find the right frequency. Probably the Russians did that on purpose lest we fail to notice. Propagation was so good in 1957 that we could hear Sputnik much of the way around the Earth during some passes. Sometimes we could go outdoors and see the satellite pass overhead just after dusk. There was a 1 kHz Doppler shift on the Sputnik signal as it passed, but the receivers that teenagers could afford weren’t stable enough to notice it. 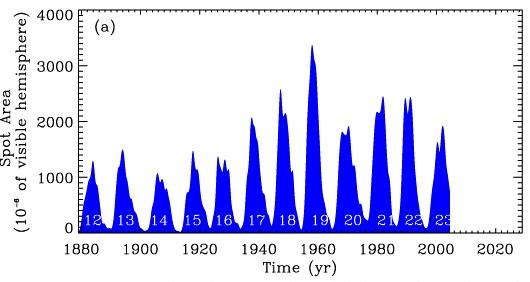 We were surprised how easy it was to work DX with very modest equipment. Ten-meter CW was really hot. On the weekends we would get up early and work one European station after another, staying with it all day until stations from Australia and Japan would start to come in just before 10 meters went dead in the evening. The world seemed a very big place to two kids who hadn’t ventured very far from home. What we didn’t know was that sunspot cycle 19, which peaked in 1957, still stands as the all-time record. DX contests were a thrill for us. By 1959, we both had our DXCC certificates and many other operating awards.

Before we were old enough to drive, we converted a Heathkit 11-meter Citizens’ Band transceiver to 10 meters and mounted it on Quent’s bicycle. The equipment was all vacuum tubes, and so we had to convert the output of a small wet cell battery to high voltage DC to power the tubes. The bicycle had an 8-foot whip antenna on the back, constructed from an old fishing pole. It was fun working locals as well as DX on 10 meters AM with only 5 watts while pedaling down the street. Everyone thought we were crazy. Why would anyone want their own personal communicator to take with them in their vehicle?? 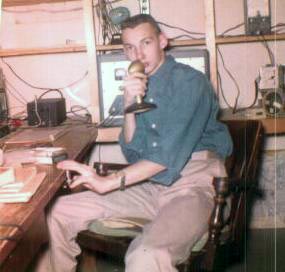 While still in high school we each built our own Heathkit DX-100 transmitter. This photo is of Clint in his basement shack, in front of his DX-100. We built many other pieces of Heath equipment – receivers, transmitters, and test equipment. Allied Radio in Chicago (via mail order) and the local Amateur Radio emporiums in Memphis (Bluff City and W&W) soaked up a lot of our allowances. We occasionally used the popular World War II ARC-5 Command Set equipment that was readily available and easily adapted for use on the Amateur Radio bands. 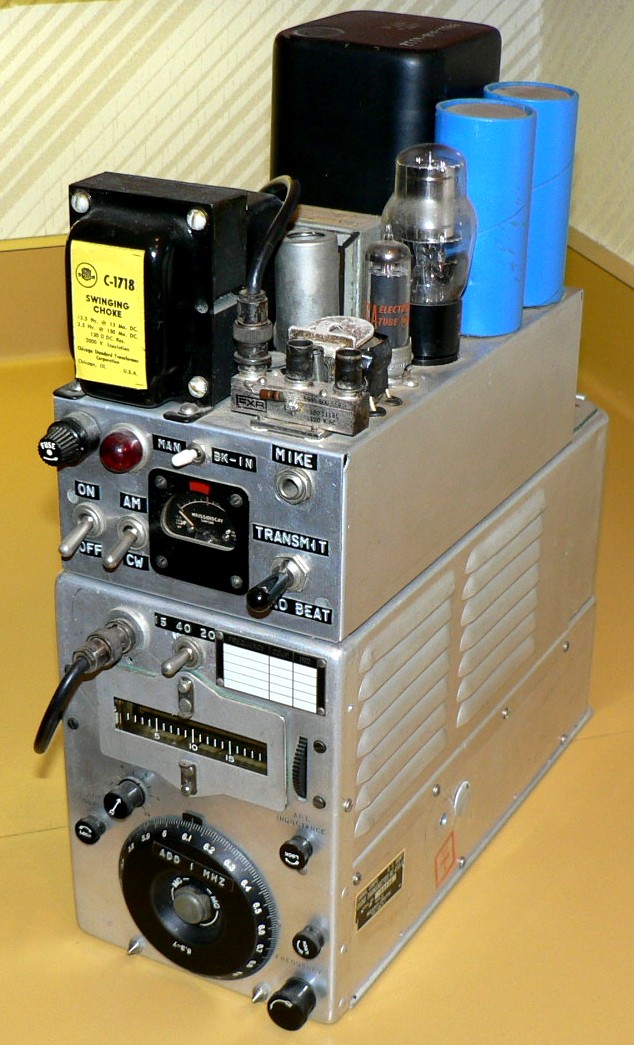 We acquired many inexpensive components from Lazarov Surplus Sales in Memphis, which sold parts by the pound. Clint remembers clipping resistors out of some of the equipment so we didn’t have to pay for the weight of the unneeded chassis. Can you blame the workers for being annoyed with us?  Much of the war surplus electronics was designed for 24-volt military equipment, but we occasionally found 12-volt amplifier vacuum tubes (1625s) and dynamotors which were the standard way to produce the hundreds of volts needed to power the AM vacuum tube transmitters that some hams put in their cars. We each built 10-meter AM mobile transmitters for our parents' cars, at a time when we were too young to drive. Clint still has an operating version of one of those over 50 years later! The other transmitter, unfortunately, went up in flames years later while his mother was driving the car after Clint went off to college. 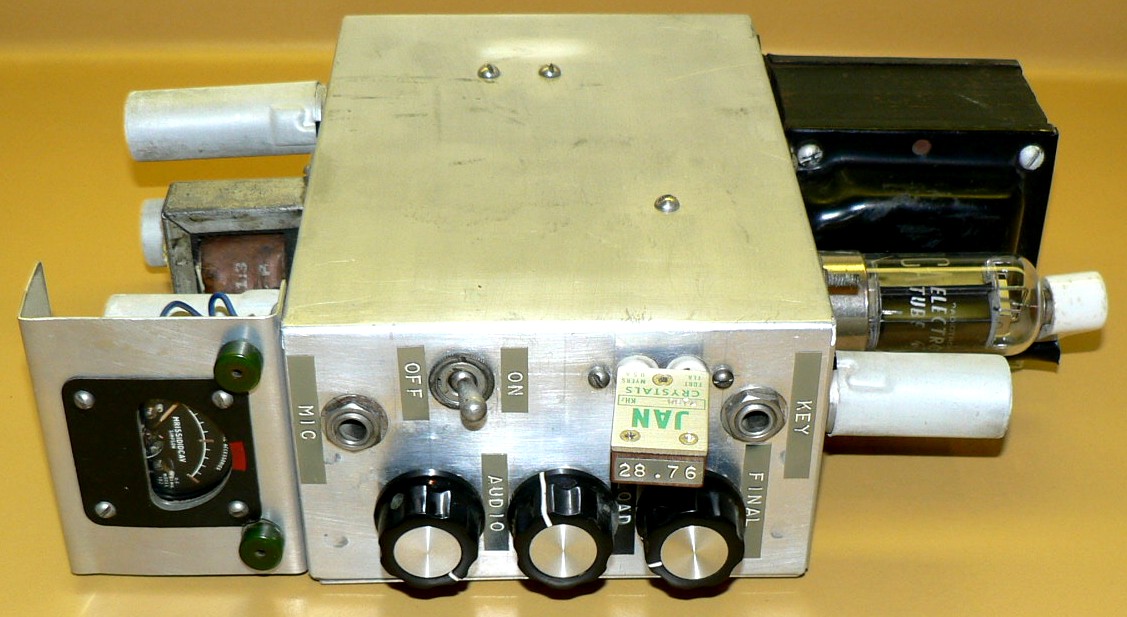 CW came easy to us, probably because we started so young. We both used mechanical bugs for sending code, and Clint built an electronic keyer using vacuum tubes, but it never quite worked right, sometimes running away and sending things never intended. We got code proficiency certificates for 35 WPM, which was the highest speed for which the ARRL tested. We were asked to teach the code to adults who were studying for their General license at the local Amateur Radio school. We would record code practice sessions at 30 WPM on an old reel-to-reel tape recorder and play it back at half speed for our students to practice so that it didn’t take so long to prepare the lesson. To keep secrets from our parents, we occasionally “spoke” to one another in Morse code. Not exactly the same as the Navajo code talkers you’ve seen in the movies, but you get the idea. 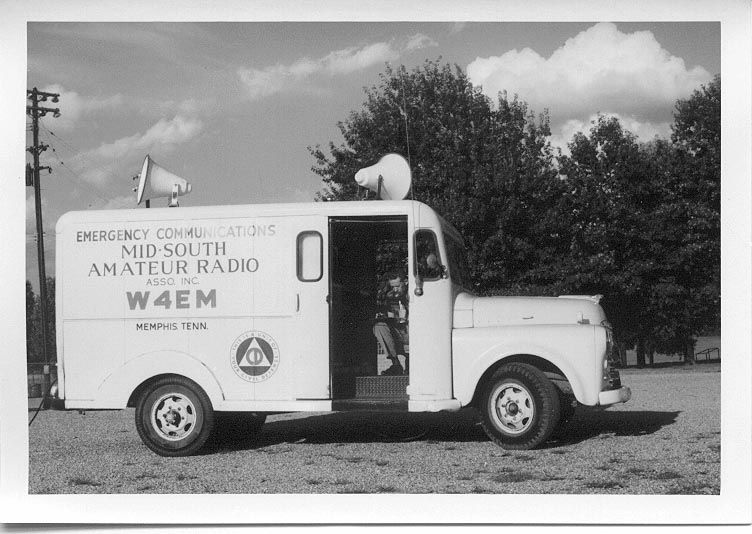 Field Day was always a summer highlight. We often operated W4EM, the club station of the Mid-South Amateur Radio Association (MARA) in Memphis. Quent is tuning the Collins 75A-3 in this picture, and Clint’s hand is on the Johnson Viking II transmitter. While still in high school, one Field Day we set up our own station deep in the woods in Overton Park and stayed up all night operating. 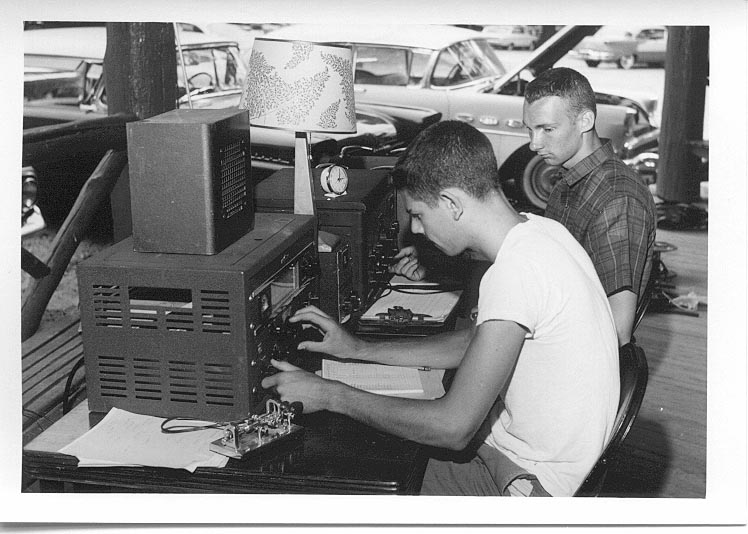 Biweekly transmitter hunts were very popular in the late 50s in Memphis. This photo shows Quent (at right car door) and Clint (at left car door) of Clint’s mother’s car before the start of a rabbit hunt. Can you imagine what Clint’s mother said after she found out that he had drilled a hole in the top of her brand new 1956 Buick Special! Reluctantly she agreed that it was better to plug the hole with a 2-meter antenna than just to leave it. This photo shows Quent’s dad, Frank Cassen, W4WBK, recording Clint’s mileage before the start of a hunt. 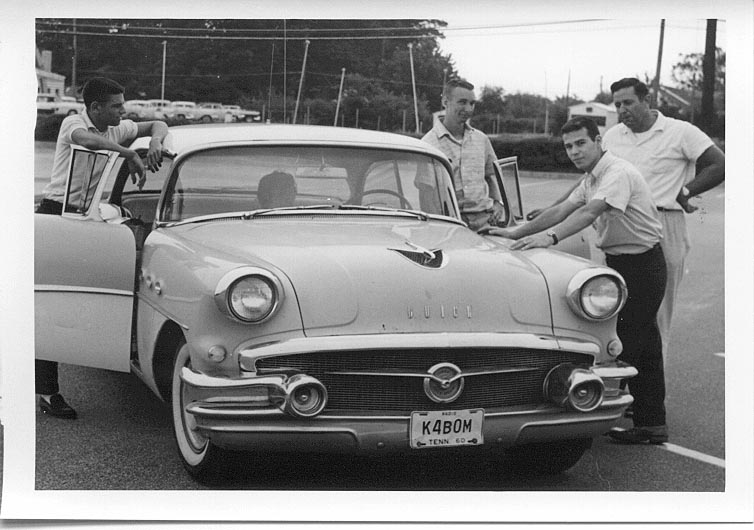 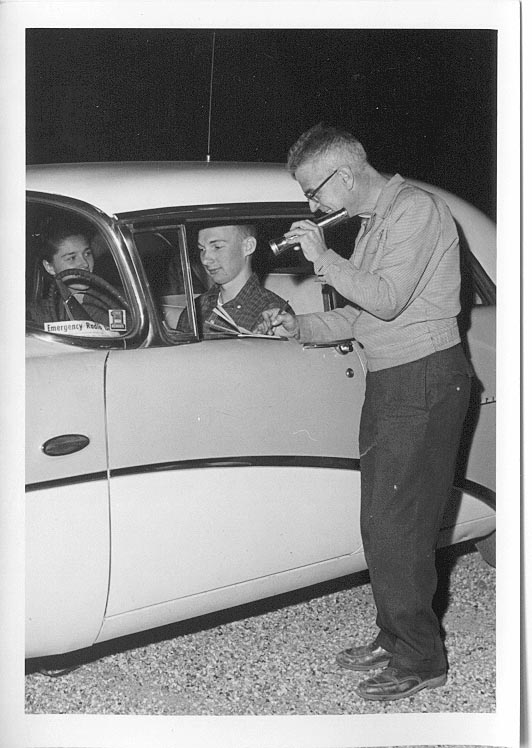 Although transmitter hunts were conducted on 10 meters, the 2-meter antenna was used for VHF communication using retired vacuum tube taxicab radios that we converted to 2 meters. The receiver and transmitter took up most of the trunk space. That was before the days of 2-meter repeaters and commercial solid-state Amateur Radio transceivers.

We used 29.627 MHz for the “Memphis 10 Meter Mobile Emergency Net.” Everyone was crystal controlled since 7406.6 kHz quartz crystals were easy to get from surplus outlets and VFOs weren’t so stable on 10 meters or even common on inexpensive and homebrew equipment. The net met faithfully on Monday and Friday nights, although it seemed no one ever had any traffic. Nevertheless, the operators and equipment were well prepared for the many drills that they took part in.

Once while at Clint’s parents’ lake home on Pickwick Lake in northeast Mississippi, we decided to go on a DXpedition of sorts. We overloaded Clint’s dad’s small boat with a gasoline-powered AC generator, a large vacuum tube receiver (SX-100), an Eldico CW transmitter, and a dipole antenna, and set up shop on a tiny island in the Tennessee River, near the dividing line between Alabama and Mississippi – all for the chance to sign K4BOM/4/5 on the air and pretend we were DX. The pileups were feeble (nonexistent, really), but it was our first time to be on the “wanted” end of a DXpedition after working so many others. Miraculously, we got back to shore without losing any equipment despite the very rough seas.

One might think that we always walked the straight and narrow, but unfortunately “boys will be boys.” Quent had a receiver that could tune to the local police and fire department, and Clint bought at a police auction for $5 a vacuum tube receiver that was on a police motorcycle that had been submerged for a month in the Mississippi River and nursed it back to health. We would often converge on the scene of local calls, first on bicycle and later by car after getting our drivers licenses at age 16. Some of the police began to know us. We would occasionally visit the police dispatcher and help him dispatch cars. We once inquired about getting summer jobs as police dispatchers but were told that one had to be 21 years old to work for the police department, and so Quent took a summer job with the electric company and Clint delivered packages for his dad’s office supply company.

After high school we both went on to college. Clint became a physics professor and Quent an electronics engineer. We have been involved in a lot of interesting technical work in our careers. Without doubt, our start in Amateur Radio with the Novice license opened many doors and launched us into our interesting and rewarding careers.
Quent Cassen and Clint Sprott
December 2006